I Live Under One of My Dozens of Parasols All Summer

Talk to any skin doctor, and they’ll tell you that if you want to avoid looking like one of the California Raisins, the best thing to do is invest in some fancy sun-shade, buy a good sun hat, and wear long sleeves in 90-degree heat. Or, they’ll also tell you, don’t go under the sun at all. As a fair-skinned blonde in Thailand, I’ve decided to stake out some kind of middle ground, becoming the kind of person who carries a parasol (I still wear sunscreen, though). Parasols have been around for thousands of years, and it’s because they’re the simplest, most practical sun protection there is, especially those versions with UPF, the fabric equivalent of SPF.

According to a U.S. study published in JAMA Dermatology, any fully-functioning handheld umbrella can block more than three-quarters of ultraviolet (UV) light on a sunny day. Black ones do even better, blocking at least 90 percent of rays.

“The umbrellas blocked between 77 percent and 99 percent of UV radiation,” wrote Suephy Chen and colleagues at Emory University in Atlanta.

Noting that umbrellas are widely used for shade in parts of Asia - up to 45 percent of women in China - as well as the Middle East, the researchers decided to see how well regular umbrellas actually blocked UV light.

So they collected 23 working umbrellas - no fabric tears allowed - from people at their medical school. On a sunny morning they used UV devices to measure radiation just under each umbrella’s fabric, and by the nose of the person using it - and then compared this to umbrella-less radiation readings.

All but one of the umbrellas was a standard, handheld rain umbrella. The other was a travel sun umbrella.

The sun umbrella blocked more than 99 percent of UV rays. Regular umbrellas worked well too, blocking at least 77 percent of UV light - and more, if the umbrella was darker coloured.

UV parasols, different from many typical umbrellas, have specially treated fabric that protects the skin from UVA and UVB rays. Though some can also be used for protection from rain, most UV parasols are designed exclusively to protect your skin from the sun and will do no good in a downpour.

Interestingly, UV parasols existed before rain umbrellas. The word "parasol" is actually derived from "para" (defense against) and "sol" (sun), and parasols in Europe were originally used by stately ladies adapting asian-style umbrellas to secure stylish, mobile shade. The modern rain umbrella didn't actually come about until the 1800s.

I first encountered UV parasols in Japan - they can be seen all over on city streets, in parks, and in local neighborhoods, and a litany of beautiful styles and colors are available. I started collecting them and bringing them home with me, and always got compliments when I took them out on my afternoon constitutionals.

Thankfully, more UV parasols have become available outside Japan, so you won't have to fly abroad to pick one up - you can buy them online now right here:


Knirps provides the highest UVA and UVB protection in the umbrella market. Have a look at yourself and find your best sun protector at the official Knirps UV Umbrella Collection 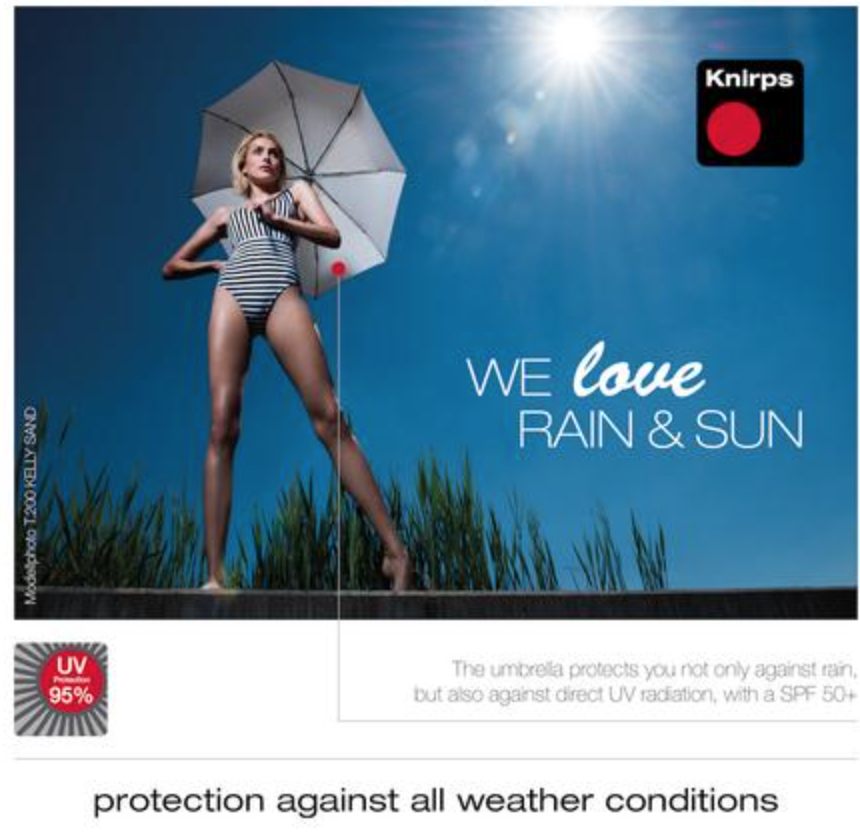